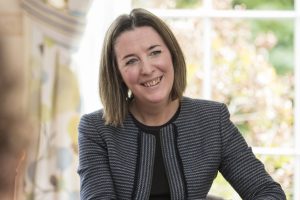 Did you pursue further or higher education?

I went to Gorseinon College to study A levels in English (Language and Literature) and Psychology. College suited me so much better than school, and the experience made me a lot more independent, so it set me up really well for the future. I did better than expected in my A levels and ended up with a place at Cardiff University studying towards a degree in Education, but my heart wasn’t really in it – I felt ready for the world of work and so I came back to Swansea and found a temporary admin job working for what was then the Employment Service at Swansea Jobcentre. I didn’t know it at the time, but that was the start of a career which would keep coming back to Employability!

What direction did you take post-education?

After a few temporary roles at the Jobcentre, I took a job as a part-time receptionist at Swansea College’s Kingsway Centre, whilst also returning to education with the Open University. I was surprised how much a different style of learning worked for me and gave me a lot more confidence. When the College won a contract to deliver a new Employability initiative – the New Deal programme – I was encouraged to apply for a role as a Mentor to clients on the programme and I was delighted to get the job, and soon after to be promoted to a Co-ordinator role as the programme rapidly grew.

How has your career journey developed?

After a few years working on various Employability programmes, an opportunity came up to completely change direction, joining the civil service in the Education Department of what was then the newly established National Assembly for Wales. It was great experience at what was such a significant time for devolution in Wales and it started me on what would become a much longer journey in the civil service. In between, I also had a few great years working in PR and Communications before I re-joined what had then become known as the Welsh Assembly Government and was lucky enough to secure a place on the Civil Service Fast Stream. It gave me some great opportunities working in a number of high-profile roles, from being a Ministerial speechwriter to developing policy and programmes for older workers, young people not in education, employment and training and leading a review of skills in the social care sector. I eventually ended up in a role working on EU funding policy and programmes, which was an entirely new area for me, and pretty daunting for a total novice! But I was lucky to work with some great colleagues who were just so supportive and made such a difference both to me personally and to what we were able to achieve.

But it also reminded me what I’d left behind, and after 17 years in or around the civil service, I took the decision to move back almost to where it all started and, most importantly, to doing what had always inspired me the most. I saw a job advertised at Gower College Swansea, developing new Employability initiatives, and the timing couldn’t have been better. I was aware that more than a few people thought it was an odd decision to step away from a job and a career that had offered me so many great opportunities (and I still thank those who kindly chose to describe at as ‘brave’ even if they thought otherwise!) but my gut told me it was the right thing to do so I went for it! Four years on, and having been part of a fantastic team, who’ve provided support to over 6,755 people and over 450 businesses to date – delivered from the same building I started work in as a receptionist for Swansea College 20 years ago – I’m pretty sure my gut was right!

Is there one thing you wish you’d known when you were younger?

I was so lucky to have parents who supported and inspired me no matter what direction I decided to take and so what others might have seen as mistakes early on, and even later in my career, I was able to see as opportunities to learn and move on from. I suppose that’s why I’ve always been motivated to help others who might not have had that support behind them. But If I could tell my younger self anything it would be that you don’t have to have all the answers now and that if you just keep your mind open to possibilities and you work really hard at whatever it is you find yourself doing, the right opportunity sometimes just comes along – even if it doesn’t quite look like you thought it would!

Top tip when applying for jobs?

Do your research – it’ll show if you have! Always get someone else to check your application for spelling and grammar – you’ll have spent so much time on it yourself that you won’t see the obvious mistakes. And just be yourself and allow your personality to shine through – a smile will help you and your interviewers to relax and that will always make for a better interview!

What is your ultimate piece of advice?